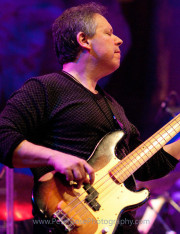 Steve has arranged for Broadway, off-Broadway, television, and numerous record albums.  As a student, Steve cut his teeth at Princeton University writing for the Triangle club and university jazz ensemble, and went on to win awards from The University of Miami, The Eastman School of Music, and Downbeat magazine.  As a professional, Steve has written for and performed with many "top shelf" artists including jazz legend Benny Carter, Salsa all-star Larry Harlow and Grammy award winner Maria Schneider.

When not leading the Top Shelf, Steve plays bass as a "hired gun" with numerous bands.  You can also find Steve playing bass in many orchestra pits throughout the tri-state region. 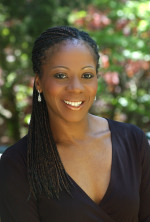 Rob Paparozzi has toured the world as lead singer and frontman with both the Original Blues Brothers Band and the legendary Blood Sweat and Tears.
A virtuoso harmonica player, Rob's at home playing a wide range of music, ranging from rock to blues to jazz to pop. This versatility is reflected in the long and remarkably diverse list of major artists Rob has worked with, including B.B.King, Dr. John, Bruce Springsteen, Whitney Houston, Carole King, Roberta Flack, Culture Club, Cyndi Lauper, Randy Newman, Jimmy McGriff, and James Galway. 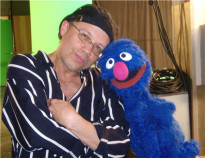 Born and raised in the Bronx, New York, Russ is an award-winning and Emmy-nominated singer / composer / arranger / producer for television, radio and film. Russ has performed on thousands of recording sessions and his singing can be heard on hundreds of national, regional & local radio and TV spots covering an extraordinary range of genres and styles. One of the most sought after and in-demand singer / performers, Russ has worked with many diverse artists and groups including Sting, Carole King, the Ramones, Korn, LL Cool J, Luther Vandross, Patti Austin, Paula Abdul, Patty Smyth, Billy Squier, Jocelyn Brown, Michael Bolton, Marc Cohn, Jimmy Webb, Linda Eder, Sophie B Hawkins, and Sesame Street.  Russ currently tours with The Hit Men. 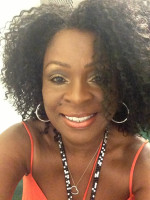 Andricka Hall a native of South Carolina, came to New York at an early age and realized her dream to be an entertainer. She studied at the High School of Music & Art and The Manhattan School of Music. Singing professionally for 27 years, she has shared the stage, recorded, and/or toured the world several times with artists including Alicia Keys, Diana Ross, Joe Cocker, John Legend, Annie Lennox, Chaka Khan, Spyro Gyra, Anastacia, Jennifer Holiday, Patti LaBelle, Taylor Dayne, Freddie Jackson, Mica Paris, Toshi Kubota, and most recently the J. Geils Band.

You may also have seen her performing on television shows including The Tonight Show, Late Night with David Letterman, and Saturday Night Live. A session singer for numerous radio and television jingles, she's also recorded a children's CD for Atlantis Marine World in Riverhead, Long Island, entitled Magic Ocean Ride. You can find out more about Andricka at her web site. 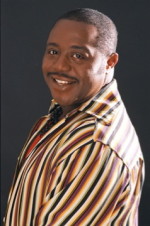 Keith is a composer, Broadway actor, and much-sought-after lead and background vocalist. Keith has performed with numerous artists including Ashford & Simpson, Roberta Flack, David Peaston, Diana Ross, The Pet Shop Boys, Olivia Newton-John, Will Downing, and Celine Dion.  In addition to co-writing Ms. Dion's "I Met an Angel on Christmas Day" Keith was a featured vocalist in the Earth,Wind, and Fire-based Broadway musical Hot Feet, a modern retelling of The Red Shoes. 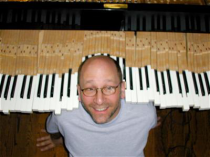 Jon Cobert is a New York-based composer/arranger/pianist/session keyboardist/vocalist. He got his Music Theory and Composition degree from N.Y.U., and began his career with a bang, recording and playing live with John Lennon (you can see him in the movie Imagine). Other recording and touring credits include John Denver, Klaus Nomi, Laura Branigan, Phyllis Hyman, Al Green, Henry Gross, Linder Eder, Leslie Uggams, Harry Chapin, and Dion, among others. He has played with Bruce Springsteen, Jackson Browne, Richie Havens, Taj Mahal, John Mellencamp, and many more. He recently appeared at Madison Square Garden in the tribute to Pete Seeger's 90th birthday concert. Since 1988, Jon has been working with Tom Chapin, recording, touring, writing and arranging, and producing. He has earned five Grammy nominations for his work as producer on Tom's recordings. He owns and operates a Protools HD recording studio, and just finished co-producing the new CD by Regis Philbin and his wife, Joy.  You can find out more about Jon at his web site. 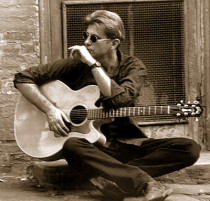 Most recognized for his work with Carly Simon, Peter Calo has recorded and performed with such legendary Grammy Award winning artists as James Taylor, Hall and Oats, and renowned record producer Phil Ramone, to mention only a few. He has performed on numerous television appearances, among them Good Morning America, Regis and Kelly, CBS Good Morning and the Late Show with David Letterman both as a band member and separately with featured guests.

Highly visible in a variety of musical realms, the spectrum of Peter's resume is diverse and expansive; ranging from nightly performances with the Tony Award winning Broadway musical "Hairspray" (including the Grammy winning original cast recording), to an impressive roster of national jingles, industrials, film scores for PBS, Oscar nominated documentaries and independent features.  You can find out more about Peter at his web site.

Gene Lewin plays the drums and sings with theatrical power-pop trio Groovelily, and hails from Princeton, NJ. Like many of his heroes (Jack DeJohnette, Russ Kunkel, Vinnie Colaiuta), Gene joyfully blurs the lines between jazz and rock, supporting and complementing the music but unafraid to instigate when the time is right. After graduating from Princeton University, Gene earned a Master's degree from the Manhattan School of Music. He tours regularly with Audra McDonald, and has appeared on CDs with George Coleman, John Patitucci, and many others. "His gift lies in his frenzied dynamo attack of cymbals and skins. Think Tony Williams sits in with Weather Report." (Mark Corroto, All About Jazz) 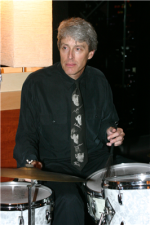 Roger has been playing drums for more than 43 years, and his playing résumé encompasses all types of music. He has played dozens of musicals, which include: Broadway: 42nd Street (original), Ain't Misbehavin' (revival w/original cast), Cats, Saturday Night Fever and Falsettos. Westchester Broadway Theater: Chicago, Grease, Jekyll & Hyde, Miss Saigon, Jesus Christ Superstar and many others. He has worked with Donna McKechnie and Linda Eder, and has performed with Chuck Berry, James Taylor and Judy Collins. Roger's jazz-playing side has found him backing up Marvin Stamm, Bill Watrous, Eddie Bert, Donn Trenner, Carmen Leggio, Bill Crow, Marshall McDonald, Nicole Pasternak, Dave Smith, John Mehegan and Joe McWilliams, to name just a few. He plays with many jazz trios and quartets, and can be occasionally heard with the Hartford Jazz Orchestra, as well as other CT big bands. He currently resides in Newtown, CT.

Louise’s 9 piece “little” big band has played at the Emmy Awards in Hollywood, California, Boston’s Symphony Hall, and numerous private events. As a guest soloist she has performed with symphony orchestras and jazz bands in Germany, Japan, Argentina, Peru and throughout the U.S. Her solo CD, Trumpeter’s Prayer, on Summit Records, features Arturo Sandoval, Tom Kubis and Carl Fontana. 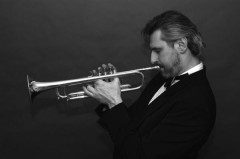 A lifelong New York musician, Tim has been building an online music licensing company - Sound Q's - with wife singer-songwriter Kati Mac. As a composer and trumpet player for TV, his music can be heard on everything from Dateline NBC and Monday Night Football to As the World Turns, The Guiding Light and Kathy Griffin among many others. Recently he has recorded with Delbert McClinton, and has contributed to Lenny White's CD Anomaly, and Mike Clark's Carnival of Soul.

In addition to arranging. producing and performing, Tim's latest project is "Hollywood Jazz" a program of music underscore and songs from films featuring a 10 piece band, and two vocalists with commentary and background provided.﻿

Jon Saxon has been a performer, teacher and bandleader in the New York tri-state area for over 20 years. He plays regularly with many different bands covering a wide variety of musical styles. Some of the more well known musicians and groups Jon has performed with include Sal Salvador, Larry Coryell, the Lew Anderson Orchestra and Larry Chance & the Earls. Locally, Jon is a featured soloist with the Sonny Carroll Orchestra and the Berkshire Big Band. 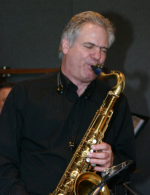 Joe Meo is a multi-woodwind player who has had a wide-ranging musical career that seemed preordained - his first instrument (a clarinet) fell out of a car and landed across the street from his house when he was 8 years old! Joe has played in numerous rock, funk and jazz bands from New Jersey to Massachusetts and has toured the world with the Jeff Holmes Big Band and the Ed Palermo band and has played with the Tonight Show orchestra under Doc Severinsen. He has played with many pop artists including Billy Vera, the Pointer Sisters, the Four Tops, the Temptations, and Johnny Mathis. His abilities on clarinet, sax and flute have allowed him to play in pit orchestras for Broadway productions. Lately he has added guitar and vocals to his musical arsenal. He also has a thriving teaching career, teaching privately and substituting in private and public schools. He is equally adept at all genres of music combining outstanding reading skills and the ability to improvise, allowing him to fit seamlessly into any musical situation. 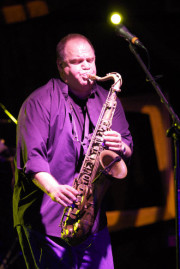 A seasoned veteran of the New York music scene, Mark has had a diversified career in many different musical genres.  Mark has taken center stage as saxophone soloist with The British Rock Symphony summer tour featuring Peter Frampton and Roger Daltry.  Mark has also performed wtih Donna Summer, Lou Rawls, Gladys Knight and The Pips, The Four Tops, The Temptations, and The Spinners.

In 2000 Mark was tapped to be soprano saxophone soloist for the world famous Riverdance orchestra.

On Broardway, Mark has performed in Grease, Smokey Joe's Cafe, Footloose, Jersey Boys,  Hairspray, Movin' Out, The Wedding Singer, Leader of the Pack, and the national tour of Barnum.